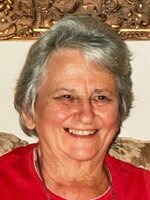 JOYCE FLORENE ANN (CHERRY) Age 91, of Upper St. Clair, on July 16, 2022. Beloved wife of the late John J. “Jack” Joyce; loving mother of Maureen A. (Susan Comerford) Joyce, Kathleen (Frank) Joyce Gaudio, John B. Joyce and Rev. Daniel R. Joyce, S.J.; preceded in death by her siblings Carl Cherry, Henry (Mary) Cherry and Pearl Miles, and her precious great grandson Jude Francis Marano; cherished grandmother of Maria (James) Marano, Brian Gaudio, Zachary (Jordan) Joyce, Sean Gaudio, Katie Comerford Joyce, John Leo Joyce, Bridget Comerford Joyce, Clare Joyce, and Coleman Joyce; great grandmother of James and Luca Marano; also many nieces and nephews. Florene was devoted to her family and to a calling of supporting and assisting others, for which she was recognized with national and local public service awards. A native of Bridgeville, PA., she graduated from Mercyhurst University with a double major in chemistry and sociology. Florene did her graduate studies in counseling at Marquette University and graduated from Chatham University’s women returning to science careers program. In the 1950s Florene worked with the Urban League of Pittsburgh assisting African American students with access to higher education and professional careers. This effort was a forerunner to NEED, the oldest community-based, nonprofit, minority, higher education assistance program in Pennsylvania. Her work with the Urban League is recorded in the Teenie Harris archive at the Carnegie Museum of Art. A commitment to civil rights has always been a part of her advocacy. Florene also served as president of the Saint Lucy’s Auxiliary to the Blind in 1974 as they were advancing the growth of Pittsburgh’s Medallion Ball to support services for those with visual disabilities. Mrs. Joyce became the president of the board of directors for Miryam’s when it opened its’ doors in 1987 to women with comprehensive mental health issues who were experiencing homelessness. Beginning on the ground floor of the Epiphany Church school building in the Uptown neighborhood, Miryam’s eventually grew to serve thousands and included Miryam’s Next Step transitional housing in Lawrenceville and eventually established a full-service center for drop-in clients and 30 transitional housing spaces on the 1400 block of Fifth Avenue. In 2007 Miryam’s merged with Bethlehem Haven and has been a part of Pittsburgh Mercy since 2016. The Post Gazette profiled Florene Joyce in 1994 article about her work at Miryam’s stating that she did not just serve on the board but in the early lean years she worked the night shifts and relentlessly raised money to grow the agency through next two decades. Her lifetime of service has been acknowledged over the years by regional and national organizations. The Chartiers Valley Commission on Human Relations gave her the Community Service Award of the Year for 1973. The American Institute for Public Service - Multiplying Good in Pittsburgh honored Mrs. Joyce with the Outstanding Citizen Jefferson Award in 1993. Mercyhurst University gave her their Distinguished Alumni Award in 1994. Florene was a lifetime member of Saint Agatha, now Corpus Christi, Parish in Bridgeville and a longtime employee of the U.S. Census Bureau. Family and friends received on Thursday from 3-8 PM at the Warchol Funeral Home Inc., 3060 Washington Pike, Bridgeville (412.221.3333). A Mass of Christian Burial will be celebrated on Friday, 10 AM, at Holy Child Church of Corpus Christi Parish. Memorials may be made to "Jesuit Refugee Services USA https://www.jrsusa.org/donate/. "