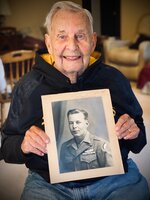 Andrew P Senecal Andrew Parsons Senecal passed away peacefully at Allegheny General Hospital on his 97th birthday, May 16, 2022. He had celebrated his birthday the previous day with many family members and his wonderful friends at The Embassy Independent Living in Mt. Lebanon where he had lived since 2015. Andy, a member of the “Greatest Generation”, was born May 16, 1925 in Tupper Lake, NY to the late Andrew Peter Senecal and Hazel Parsons Senecal. He grew up in Plattsburgh, NY and graduated from St. John’s High School. After high school he enlisted in the Army and served in the 222nd Anti Tank Company(Rainbow Division) as a gunner in the 3rd platoon. He received a bronze star for meritorious achievement in action at Wurzburg, Germany. He was currently involved in a project that is documenting the history of the 42nd “Rainbow” Infantry Division. He participated in a live interview and many zoom calls sharing his memories. After the war he returned home to Plattsburgh where he met and married his wife of 66 years, Joyce Gebo, who preceded him in death in 2014. He attended Syracuse University on the GI bill, graduating in 1951 with a degree in chemical engineering. He had a long and successful career with Koppers Company retiring in the early 1980’s. After retirement he volunteered for over 25 years at Mellon Junior High School in Mt. Lebanon tutoring students. He also enjoyed spending his summers at his cottage on Lake Champlain in Plattsburgh, NY and really looked forward to the week every summer when all his children and their families gathered at the lake and brought much laughter and chaos to the usually peaceful and serene atmosphere. Besides his parents and wife, Andy was preceded in death by his 3 son-in-laws, Steve Martin, Ray Williams, and Tony D’Aurora, his siblings Robert Senecal, Kathleen Phifer, and Anthony Senecal. He is survived by his children Kathleen Williams of Syracuse, NY, Ann (Robert Tompkins) Martin of Moriah Center, NY, Patricia D’Aurora of Steubenville, OH and his son Andrew Timothy (Mary Ann) Senecal of Virginia Beach, VA. He also leaves behind his 8 grandchildren Sean (Amanda) Martin, Joe (Aly)Martin, Bryan (Erin Freed) D’Aurora, Shana (Chris)Wydra, Jeremy (Maureen)Williams, Cassandra Hall, Staci Senecal and Amber Senecal, 11 great grandchildren and many nieces and nephews. Also survived by his sister-in-laws June Rogers and Janet (Kenneth)Lehl. In lieu of flowers, please direct memorials in his name to SouthBridge EMS, 178 Hickory Grade Road, Bridgeville, PA 15017. Andy was currently and for many years on the Board of Directors of SouthBridge EMS. Friends received Monday May 23, 2022 4 -7pm, in the WARCHOL FUNERAL HOME, INC., 3060 Washington Pike, Bridgeville (412-221-3333). A mass of Christian Burial will be celebrated on Tuesday at 10:00am in St Thomas More Church. Burial with Military Honors at 12:30pm in the National Cemetery of the Alleghenies. There will be coffee and donuts between the mass and burial at St Thomas More Church.