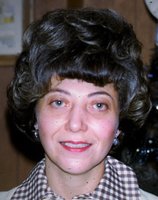 COLUMBUS REGINA M. Age 89, of Bethel Park, formerly Scott Township and Carnegie. Regina was born in 1931 in Carnegie to Damiano and Ippolita Columbus who immigrated to America from Castellammare del Golfo, Sicily in the early Twentieth Century. They settled in Carnegie where they raised their nine children in a loving home. They all worked together to get through the difficult times during the Great Depression and World War II. Regina continued to reside in Carnegie for more than fifty years before moving to Scott. She was a long time member of Saint Luke Parish (later Elizabeth Seton Parish) in Carnegie and Our Lady of Grace in Scott. Regina and her twin brother Eugene were the youngest of the family. She served in the United States Air Force Reserve with the 911th Air Wing at the Pittsburgh Airport. She worked for Royal Typewriter before joining Hays Typewriter in Heidelberg where she served as Office Manager until her eventual retirement. She enjoyed writing poetry and won awards for her work. She also liked to travel. She visited Italy in 1996 touring from North to South with other family members. A highlight of the trip was a visit to the home town of her parents. She was able to find and enter the house where her father had been born more than 100 years earlier. Regina is pre- deceased by her eight siblings: Marian (Charles) Fereday, Nora (Joseph) Romano, Sue (Dante) Caiuzzi, Leonard (Kaye) Columbus, Seraphine (Mary) Columbus, Lawrence (Dorothy) Columbus, Vito (Jane) Columbus, and her twin brother Eugene (Cathy) Columbus. She is survived by 13 nieces and nephews who appreciated her deep affection and loved her very much. She will be missed by many family and friends. Special Thanks to the staff at the Paramount in Bethel Park, for their loving and compassionate care for the last several years and her caregiver Celeste. Family and Friends received on Thursday, 2-8 PM, at the Warchol Funeral Home, Inc., 33060 Washington Pike, Bridgeville (412-221-3333). A Mass of Christian Burial will be celebrated Friday, 10:30 am, at Our Lady of Grace Church of Saint Michael the Archangel Parish.